The Werebear project was launched as an internal initiative by Cassagi, with the objective of showcasing our capabilities to both our clients and the gaming industry.

To push ourselves to create something new and unique. Did we achieve it? You decide. It was a bit difficult to decide what to do at first, as starting with nothing but a blank slate can often be more challenging than having a specific assignment. But as we progressed, we honed in on the fantasy character category. The possibilities within this realm are vast, but we were determined to create something truly special.

After thorough brainstorming and research, we decided to focus on a distant cousin of the werewolf: the werebear. Our research revealed a lack of high-quality, realistic-looking werebears in the AAA gaming market, and we saw an opportunity to fill this gap with our own creation.

To aid us in our efforts, we utilized Miro as a collaborative whiteboard tool. It proved to be an invaluable asset, allowing us to share ideas, leave comments, track progress, and more. We highly recommend it to our peers in the industry. Once the main idea was chosen, we embarked on the concept phase and took an innovative approach. We immediately commenced working on the 3D concept in ZBrush using Dynamesh. We aimed to create our werebear more humanoid in appearance, with a bulky and muscular body mass, as opposed to being animalistic.

Here are a few samples of head and chest base shape designs: The final concept for the body was developed through multiple iterations, and we then focused on the design of its fur and clothing. While our main inspiration came from the popular game God of War and Nordic mythology, we also had the ambition to incorporate some fantasy elements. Although not all ideas made it to the final image, the brainstorming process was one of the most enjoyable parts of the project.

As there is no such creature in nature, we had the freedom to let our creativity and imagination run wild without having to adhere to any real-world references. Our werebear is a thinking beast, not primitive, and therefore, we chose armor that is well-suited for such a creature. We invite you to take a closer look at our werebear in all its glory.

Check out some of the belts we experimented with: With the basic body and clothing already designed in ZBrush, the next step was to bring the high poly mesh to life. Using a base body mesh from our inventory, we quickly wrapped it onto the Werebear body. Maya proved to be a valuable tool for manual head retopo and UVs for the high poly mesh, as we wanted to use displacement maps for added body detailing.

To achieve high-quality displacement maps, we employed R3DS Wrap to project the displacement from the base body to our new body and UVs. We also used various scans and photos to create a displacement texture, allowing us to add significant detail to the body quickly. Finally, we used Flippednormals Skin Kit for the head, ensuring precision even though some details would be covered by fur.

When it came to the belt, we got creative with ZRemesher. For UVs we used Polygroups and UV Master. Thanks to our earlier work on the high poly mesh, we were able to reuse the same mesh for the low poly version with just a few adjustments. We fine-tuned the hands, feet, teeth, and tongue of the werebear through a manual retopology process and also created a new retopology for the belt. Maya’s Quad Draw tool was our go-to for all retopology.

When it came to the bones on the belt, our artist Lukas Chrapek decided to mix things up and employed Decimation Master for a unique approach. The results were impressive, but keep in mind that some tris can be saved if you go the manual retopology route. UVs were crafted in Maya. We determined that two UDIMs for the body and belt were all we needed, no need for four separate materials. Thanks to the power of Virtual Textures in UE5, two were more than enough – one for the body, one for the belt.

Final UVs for the body and the belt: Marmoset Toolbag 4 was a game-changer for our baking process. With its lightning-fast speed, baking was done in mere seconds thanks to its GPU-accelerated baker. Setting up was a breeze, and we used a base resolution of 4K for the bake.

To see more results of our work, check out our entire portfolio here. Texturing was a two-fold process. In the first stage, we created basic skin and belt textures to have something to assign to the model in Unreal Engine during the grooming phase.

We utilized Substance Painter to create the textures. With its UDIM workflow, we were able to texture the entire body without the need for switching texture sets.

The second stage of texturing was all about the finishing touches. Our main focus was on the character’s key features – the head, belt, and axe – to bring the model to its full potential.

From the get-go, we were eager to experiment with Unreal Engine’s Alembic workflow for the werebear’s hair and fur. After considering options like Maya Xgen and Houdini, we ultimately settled on Houdini and its grooming tools. Although we had some experience with simulations in Houdini, this was our first time using its grooming tools. It did not take us long to fall in love with its non-destructive workflow. We can highly recommend the GroomBear plugin by Kamil Wacławiak for its flexibility and great tools for creating and grooming hair guides.

The next steps of our learning journey were a combination of the SideFX Youtube channel, Houdini Youtube creators, and our own trial and error method from that point.

The Werebear character was divided into several parts and for each part, we created our own grooming guides and hair generators. The most challenging area was the bandages on the legs. We devised our own guide to simulate flyaway fur, and the rest of the fur was tucked under the bandages. Houdini offers a plethora of useful tools for painting masks, adding, and changing masks for density, length, clumping, and more. You can easily add your own attributes for your Hair Generators using Attribute Wrangler. Exporting the Alembic data to Unreal Engine 5 was easy and straightforward. We created a new GEO Node and merged all generated hair from HairGenerators to it. The attribute promotion was used for hair thickness and attribute transfer for vertex colour in order to be exported. 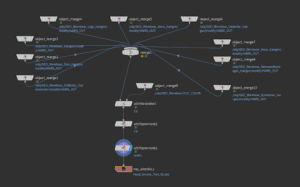 Bringing our Werebear to life required a bit of rigging, and that’s where the Maya plugin Rapid Rig: Advanced by Dustin Nelson came in handy. This plugin allowed us to quickly and easily create a rig that had all our character needed. It is rather important to repeatedly test textures and fur in an engine of your choice to get the results that you are looking for. For our work, we chose Unreal Engine 5 (UE5).

Exporting fur from Houdini and importing it to UE5 is a smooth process, especially when you don’t have to generate guides for imported fur. It was possible at the start, however, we had to turn on guides generation in later stages. That enabled us to see if fur looks pleasant and authentic when the character is in the desired pose.

For the fur shader, we adopted a Metahuman hair shader with a few modifications.

A simple studio shot gave us more control over lighting in our final scene compared to a typical environment scene. We used Lumen for lighting and reflection.

The scene of the Werebear character with fur simulation and animation running in 4K (around 30 fps on an RTX 3090) was quite demanding on the hardware. The scene was quite heavy and UE5 was crashing often due to driver crashes which was a significant downside. Even Tdr Delay did not solve this issue.

Rendering the final images of our Werebear in the high resolution required a bit of finesse, and that’s where the Movie Render Queue tool came in handy. It was crucial to set up Render Warm Up and Engine Warm Up to ensure that the first few images rendered were not blurry due to fur simulation.

Crashing was a common occurrence during the rendering process, and 8K images proved to be quite a challenge. However, we were able to overcome this by using DLSS in UE5, which allowed us to obtain high-quality 8K renders. Setting up DLSS for UE5 is as simple as downloading the UE plugin, copying and pasting a few folders, and turning on the DLSS plugin in UE5. When you turn on the DLSS plugin, you can add DLSS/DLAA to your Movie Render Queue and set up your preferred quality as you can see in the image below. With this powerful tool, we were able to obtain desired 8K renders in great quality. Working on this little side project brought us lots of fun and new learning opportunities. Overall, we have grasped new skills and managed to complete our fantasy character Werebear without changing our initial idea with satisfying results. What do you think?

If you are interested in cooperating with Cassagi, do not hesitate to leave us a message!

Ever heard of Dall-E or Midjourney? Read more here.

Previous All Articles Next

The “Willys” Jeep is one of the most popular military vehicles of World War 2. The first version of the 3D model was created in 2013 and has gone through several major changes to become the AAA game asset you see today.. You can almost track our increase in experience and skill in the changing quality of the model.

By using the sites operated by CassaGI, you agree to the use of cookies, which help us provide better services

I agree More info
Manage Cookie Consent
We use technologies like cookies to store and/or access device information. We do this to improve browsing experience and to show personalized ads. Consenting to these technologies will allow us to process data such as browsing behavior or unique IDs on this site. Not consenting or withdrawing consent, may adversely affect certain features and functions.
Manage options Manage services Manage vendors Read more about these purposes
View preferences
{title} {title} {title}